Best Sugar Substitute 2021: Shopping Guide & Review | Skip to content
a) Our staff is not associated with the manufacturers of the products we recommend. However, we do publish the links of selected online stores that may compensate us financially. More information. b) We use Cookies to analyze the traffic of this web page. By continuing to browse this site, you confirm that you are happy with our use of Cookies. Privacy policy.
Home » Weight Loss » Best Sugar Substitute 2020: Shopping Guide & Review

I am a professional health and wellness coach with a degree in Nutrition. Soon after graduating, I began writing articles on food and nutrition. I've observed that people read so much about these topics, but in most cases, the information they get is false or misleading. My goal is to offer you simple, trustworthy, concrete information so that you can learn to improve your lifestyle - especially your diet! You can send me an email.
Share

How we pick our products

A sugar substitute is a product that tries to imitate the sweet taste and sweetening power of sucrose, known as common sugar. Unlike the latter, a substitute does not provide energy, nor does it promote tooth decay, nor does it raise blood sugar levels. The healthiest alternatives are erythritol, birch sugar (xylitol) and stevia.

Although sugar substitutes are massively used to facilitate weight loss, these sweeteners help prevent diseases linked to sugar consumption, such as hypertriglyceridemia, type II diabetes, and nonalcoholic fatty liver. What is the best sugar substitute for you? Keep reading to find out!

Our Selection: The Best Sugar Substitutes on the U.S. Market

There are natural and artificial, liquid and granulated, caloric and non-caloric substitutes for sugar. In this guide we will focus on sweeteners that have very few (or zero) calories. We have analyzed the products on the market that meet this criteria and have the following choices to choose from: 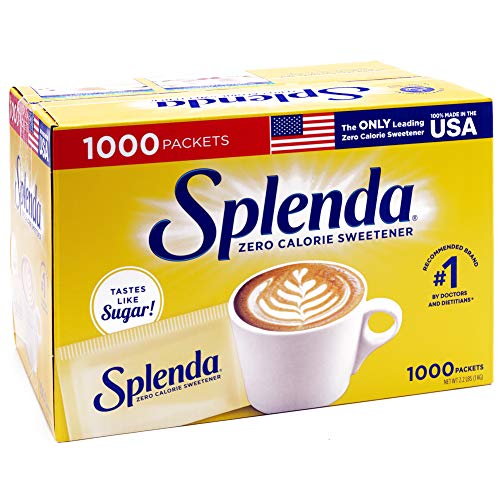 Splenda is a well known and loved brand when it comes to sugar substitutes. This box comes with 1000 packets, each containing the sweetness of two teaspoons of sugar. Enjoy guilt-free sweetness! Splenda is suitable for people with diabetes or following a low carb lifestyle.

You can use Splenda in all of your favorite baking, cooking and sauce recipes that call for sugar! Simply swap Splenda for sugar – it swaps 1:1, and reduces unwanted calories from added sugar in all kinds of homemade meals and beverages. 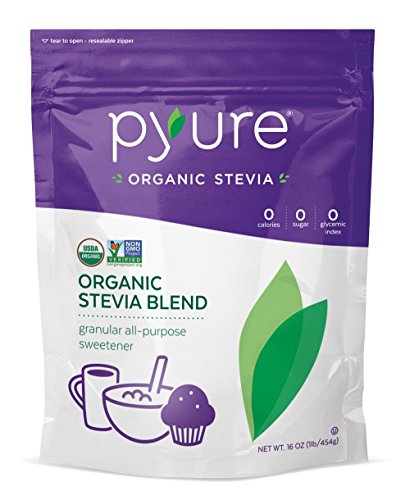 Twice the sweetness of sugar, Pyure uses a higher percentage of organic stevia with less bulking ingredients making it approximately 2x sweeter than sugar. It cooks and bakes like real sugar, and can be used for sweetening everything from cookies and cakes to coffees and tea or sprinkling over oatmeal and fresh fruit. It dissolves great and mixes well!

It’s granulated so that it has the same consistency and ease of use as sugar, but with a zero glycemic index and none of the calories, it’s a far healthier option! 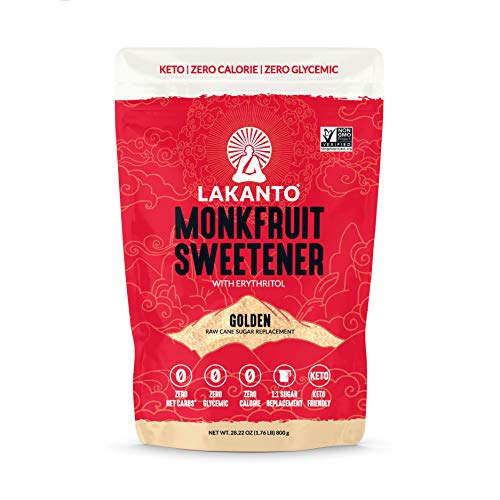 This sugar substitute by Lakanto contains zero net carbs, zero calories, and is zero-glycemic. Perfect for cookies, coffee, desserts, and other sweet, sugar-free treats! Even if you are on a diet, it works with ketogenic, diabetic, candida, paleo, vegan, low-carb, low-sugar, non-GMO, and all-natural diets.

This is a very popular product, with a high rating and over 15,000 reviews. This unique blend of non-GMO erythritol and all-natural monk fruit extract is a perfect cup-for-cup replacement for raw cane sugar!

Shopping Guide: Everything You Need to Know about Sugar Substitutes

Given the great variety of sugar substitutes that exist in the market, you should understand their nutritional profiles, health benefits and uses in the kitchen. All the information that we will go over in this section will be useful to differentiate the types of substitutes and make the most of these products.

What is a sugar substitute?

A sugar substitute is a product capable of providing sweet flavor to food and drinks, whose energy contribution (calories) is low or none at all. It can be natural or artificial. Also, unlike regular sugar, a substitute does not damage teeth or cause elevations in blood glucose levels (1, 2).

Are all sugar substitutes calorie free?

All sugar substitutes are characterized by having fewer calories than sucrose (common sugar). However, some of them have some calories, for example, xylitol or birch sugar, which has the same sweetening power as sugar, but has half the calories, does not promote tooth decay and does not increase blood glucose (2).

Others, such as stevia or acesulfame K, are considered calorie-free because their sweetening power is much greater than that of common sugar and, therefore, they are used in very small quantities. To get calories from these types of substitutes you would need to consume kilograms, which is impossible (2.3).

Kayla McDonell, RDDietitian .
“Added sugar is probably the single worst ingredient in the modern diet.It has been associated with many serious diseases, including obesity, heart disease, diabetes and cancer.What’s more, most people consume way too much sugar and often have no idea.”.

What types of sugar substitutes are there?

Sugar substitutes can be classified according to their origin (natural or artificial), their energy supply (nutritious or non-nutritive) or their sweetening power. However, we have decided to distinguish them according to their ability to replace sugar, both in terms of sweetness and texture:

What benefits can a sugar substitute have?

Although it is common to associate the use of a sugar substitute with a diet to lose weight, the health benefits of these types of products exceed their status “zero calories”, such as explained below:

What are the best sugar substitutes?

The choice of the best sugar substitute depends on the consumer’s preferences and the use. For example, in terms of taste, those that provide a sugar-like sweetness are erythritol and xylitol. Within intensive sweeteners, stevia is usually very accepted, although it may leave a slightly bitter taste.

Not all sweeteners can replace common sugar in desserts and pastries. In these cases, it is best to opt for xylitol or erythritol. You can also mix a bulking agent (erythritol) that has the texture and volume of sugar, with an intensive sweetener (stevia or aspartame) that provides sweetness.

What are the differences between erythritol, birch sugar (xylitol) and stevia?

Although these three sugar substitutes have a natural origin, there are great differences in terms of their sweetness, digestive tolerance, presentation and uses. In the following table, we show the distinctive characteristics of erythritol, birch sugar and stevia (10):

The possible carcinogenic effects of artificial sugar substitutes have long been studied, but no conclusive results exist. Aspartame, acesulfame K, saccharin and sucralose are currently the most widely used artificial sweeteners (10).

Sodium cyclamate has been banned in the United States for almost 50 years because of its association with bladder cancer. Aspartame has also been the subject of complaints to the health authorities, but its use is still authorized. For this reason, we recommend natural sweeteners, such as stevia, xylitol, and erythritol, which appear to be safer (1.10).

Can children have sugar substitutes?

Currently, children and adolescents can ingest sugar substitutes in moderation and these products can even be beneficial in cases of diabetes, obesity and other metabolic disorders. Saccharin, aspartame, acesulfame K and sucralose are ok, as are more natural substitutes, such as stevia (11).

For a long time, the medical community was reluctant to recommend the consumption of sugar substitutes in children.

For a long time, the medical community was reluctant to recommend the consumption of sugar substitutes in children.

However, research has not shown a positive association between consumption of artificial sweeteners and the prevalence of childhood cancer, learning disabilities, attention deficit, allergies, or behavior disorders (11).

In any case, it is necessary to moderate the consumption of the substitutes during childhood because their intense sweet taste can alter the gustatory perception in children and make them have a predilection for very sweet foods. This means that just because a drink is sweetened with saccharin or stevia, doesn’t mean it can be consumed on demand by children.

Because there are many options for sweeteners, you need to find one that suits your preferences, needs and budget. You just have to spend a little time evaluating the following purchase criteria:

Sugar substitutes are marketed in different forms: granulated, liquid and as tablets. Ideally, for bakery and pastry products, opt for substitutes that mimic the texture and volume of sugar, for example, xylitol and erythritol. Liquid and tablet sweeteners are recommended for infusions and beverages.

Xylitol and erythritol are available in granules, while stevia, saccharin, and sucralose are available in liquid, granular, or tablet form. Granulated substitutes are also usually presented in small individual sachets that are very easy to transport, just like tablets.

Once again, xylitol and erythritol polyols are the option chosen for having a flavor almost identical to that of ordinary sugar. However, stevia also tends to be highly accepted by consumers, although it may leave a bitter taste. High-dose saccharin gives a metallic flavor (10).

Not all sugar substitutes withstand high temperatures well enough to be used in bakery and pastry products. The best sweeteners for cooking are stevia, sucralose, acesulfame K, xylitol, and erythritol (10). Xylitol can even caramelize just like regular sugar does.

Due to consumer preferences for sweets and mounting evidence of sugar’s ill health effects, various substitutes have emerged to mimic the taste and texture of regular sugar. Stevia, xylitol, and erythritol are the healthiest sweeteners, but saccharin and sucralose are also widely consumed.

A sugar substitute is capable of sweetening drinks and solid foods, without adding calories or simple sugars. These products do not promote the development of tooth decay, and do not increase blood glucose and allow you to eat or drink something sweet without harming your health. They are highly recommended in cases of obesity and diabetes.

Why you can trust me?